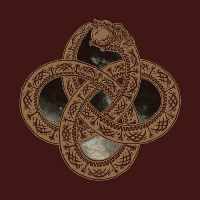 Although I was aware of this band, ‘The Serpent and the Sphere’ is my first encounter with Agalloch. For those who like me are unfamiliar with this act, I’ll do my best to describe their sound, but be warned, there are lots of different influences at work here. Firstly, there are the dreamy neo-folk acoustic set-pieces (courtesy of Nathaniel from Musk Ox). While they aren’t the most exciting interludes, they do help set the tone for the record. Beyond those we have five longer tracks of mostly slow to mid-paced material. The emphasis is on a kind of folksy doom with long songs that build momentum as they go, leading to finales made up of driving beats and intertwining twin guitar lines. Those in the know have compared this release to the band’s second full length ‘The Mantle’.

While some of the melodies and tremolo picked guitar lines seem a little obvious to my taste, there is no denying that the climax (when it finally gets here) will work its magic on you. And that is what it all comes down to. Are you a patient listener who will give a band the time to build their case slowly? In that case, there is plenty here for you to like and this is the kind of record that you will return to over a prolonged period, getting more from it each time. Or perhaps you are like me and want it all and want it now. If that is so, then this album would provide a welcome but not absolutely essential listen from time to time. Either way – a safe bet.