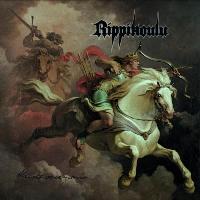 ‘Musta Seremonia’ was originally released as a demo in 1993. At the time Swedeath and the Floridians were garnering the lion’s share of the interest in the death metal scene and this gem went largely unnoticed. Which is a pity – since this is the best Finnish Death Metal I have ever heard. If I had heard this back in 93, Rippikoulu would have been as important to me as all of the others I was listening to at the time, including Carcass, Bolt Thrower and Morbid Angel. And it isn’t every day you discover a band you can speak about in those kinds of terms – a band that can sit comfortably shoulder to shoulder with your idols from an era.

For a start Rippikoulu are about as heavy as it gets. The fuzzed out guitars produce a miasma of black noise that fills the room like a fog. The leads crawl like tentacles from a pit. The vocals are gravestones shifting as the undead emerge in the moonlight. This is death metal! The production captured a heaviness and raw energy over twenty years ago that the likes of Teitanblood and Portal have only ‘re’-discovered in recent years. The sound of Rippikoulu going full tilt harks back to the repulsive early days of grind. These guys should tour with Bolt Thrower. When Rippikoulu really slow things down, time seems to thicken and drag with creeping doom and eerie keyboards sound like lost souls through the mist. There is nothing about this that I don’t like.

Sadly, Rippikoulu guitarist Marko Henrikssen died in 1995 and this along with other factors put an end to the band’s ambitions for the time being. I am happy to say they are back and have a new release on the way – so more on that to come! Meanwhile – try this one out for size.