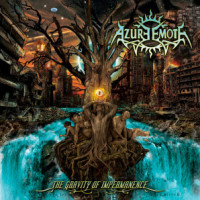 AZURE EMOTE – The Gravity of Impermanence

2012 brought us Ne Obliviscaris (NO) and 2013 brought us even a better deal -Azure Emote (AE). While there are detectable similarities between the two, AE has a better, more focused songwriting, more powerful sound and is overall a lot more interesting song to song. Azure uses multininstrumentation, such as saxophone and violin but, unlike NO, they don’t push it into every song only using it within the context of a particular track. NO was, in its own special way, formulaic in that once you’ve heard the first composition, it tended to blend in with the rest of them, more like a one huge symphony with not easily identifiable movements. Oppose this to the best track on Azure’s album, "Puppet Deities", with its Morbid Angelesque unnerving atmosphere. At its core they remain melodically but powerfully progressively death metal, without being melodeath.

AE makes every track different almost to the point of seemingly doing it on purpose, which in turn implies a design. They also see familiar lyrical themes but present them in a innovative way, like, for instance, take on what life really is and whether it should be valued as much as some religions, particularly Christianity teaches, at least in theory. Particularly, the sacredness of life even though "you stink after you die" is questioned by Azure. AE uses quotes like "…life is a gift. Who gave it to me?" or the simple yet brilliant "What crime has this child committed that it should be born?" to prove a powerful point that without religion there would be less soul-raping laws and that most of them are influenced by theocrats whether openly theocratic or secularist in disguise, like, for example, Bill Clinton who helped pass the blatantly verbatim unconstitutional Defense of Marriage Act, concerning same sex marriages, a nasty piece of theocratic legislation with absolutely no basis but in mythology, thankfully recently defeated.

Azure makes it obvious that without religion in government people are more free, though not necessarily happier, the first a condition to choosing the latter. But religion-based laws are not always so easy to spot as when looking at the recent rightwing pressure to rule the tangible with the abstract. Azure Emote are no more communists than me – the government helping your happiness is, too, an aberration of the right contained within the words of Declaration of Independence "life, liberty and the pursuit of happiness", those tendencies coming from the lesser known, but not less dangerous, religious left. In both cases I am stripped of my choice to either be miserable or happy, with the rulers making both decisions for me.

To paraphrase another powerful quote from this album, we tend to take natural law and dress it in mythology for legislative purposes, again, to let the dead rule the living, as in in the case of Catholic saints revered in authority with not a shred of evidence for their immortality.This may be my own interpretation on what Azure attempts to convey but I don’t think it is too far removed from their point. All things pass away and life is besieged with pain and suffering, all of which foreshadow death which spared not even the man Jesus Christ, the Christian savior who prevailed over that last enemy only by your faith. It all, therefore, comes down to the truth: life is ultimately meaningless and pointless, but we have a choice to give it both purpose and meaning including a choice of not making such choice.

One of the most interesting and not easily pigeonholed records in recent repute and memory. It would be (wink, wink) a sin to forget about it altogether just because I did last year.