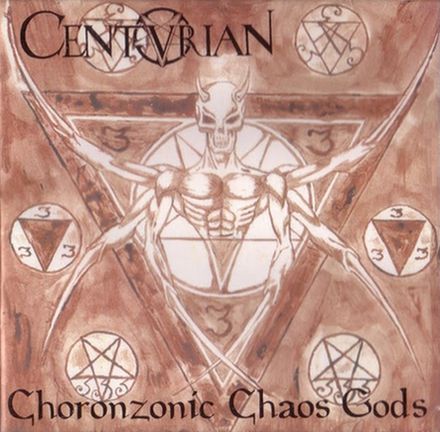 Centurian´s (NL) debut "Choronzonic Chaos Gods" orignially from 1999 is getting the re-release treatment from Hells Headbangers and what a pleasant surprise this was. Centurian was not an unknown entity for me but I´ve never taken the time to give them a proper listen. This is uber heavy second wave death metal with an massive influence of early Deicide (espescially on the vocal part) and it works out very well. The vocal is the first thing that must get praised. Seth (from Severe Torture) is singing out of his skin on "Choron.." and gives Glen Benton a heads up on how to do proper Glen Benton vocals (no, not vokills, but vocals).

He´s voice could  have fooled me and that is much of what makes Centurians debut an blasphemous and powerfull session in unholy death metal.
The music itself is fast and relentless but maybe not that original but who give´s a f**k when the atmosphere and intensity is there.

The pedal to the metal all the way and if you have any (obscure but good) feelings about Deicide´s "Legion" album you´ll give "Choronzonic Chaos Gods" a try.