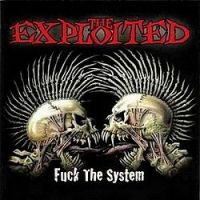 With 2003’s ‘Fuck the System’ it felt as if the band’s sound had come full circle. For a start, the production was the most professional sounding yet. But more than that, the band hadn’t produced anything for 7 years, so ‘Fuck the System’ had the feel of a band who had been off to the gym, cut down to 40 fags and 10 cans of cider each per day and come out of the gate fighting. For me, it is the band’s most focussed offering since 1987. The cover kind of reminds us of the cover of ‘Beat the Bastards,’ only upgraded for the new millennium and the sound is similar. We still have the same feel, only it is tighter, more powerful, and the song-writing and performing are more effective. Plus, some of the magic of 80’s Exploited has crept back in, giving it an edge over the other two reissues.
This version contains 4 tracks from ‘Death before Dishonour’.

It is great that Nuclear Blast have seen fit to sign this seminal act and let’s hope this trio of releases helps to introduce them to a new generation of maniacs. For older fans, these releases also present a great opportunity to fill those gaps in their collection. I can heartily recommend them all and hope they encourage fans to go and check out more of the band’s output.

MAGNUM – Escape From the Shadow Garden