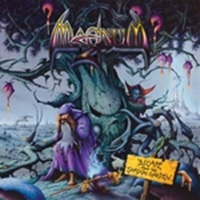 MAGNUM – Escape From the Shadow Garden

18 studio albums and charging forward – it’s the semi-progressive hard rock veterans from the UK otherwise known as Magnum, aging appropriately like a fine wine. It’s nice to see older musicians willing to pump out studio albums on an annual to semi-annual basis – proof that creative minds do not diminish as the hair turns grey or goes away.

Bob Catley’s range is very similar to a lower register Ian Gillan/ Deep Purple, playful and expressive during stirring anthems like "Falling For the Big Plan" and reflective on the bluesy ballad "Don’t Fall Asleep". Musically the 11 tracks are still song-oriented, offering flashes of progressive flair from keyboardist Mark Stanway on opener "Live ‘Til You Die" that should get the Magnum long-timers giddy while guitarist Tony Clarkin offers a steady diet of simplified licks that keep the focus on strong hooks that makes "Crying in the Rain" an early standout.

Speed and ‘look at me now’ intricacy isn’t Magnum’s forte – "Escape from the Shadow Garden" settle into mostly mid-tempo or epic terrain, keeping the arrangements in the 5-7 minute range for the most part and allowing the players to extend sections based on atmosphere and feel. This was one of those albums that even at an hour plus doesn’t bog down in filler tricks or ho-hum instrumentation – those of you who love the band and understand their bluesy, semi-progressive direction will know the band just rocks to a different banner.

If Magnum keeps cranking out winners such as "Burning River" (probably the most up-tempo arrangement, featuring killer fills from drummer Harry James), Magnum could conceivable crank out another 3-5 solid records that won’t diminish their legacy. Most current Deep Purple fans will love this.