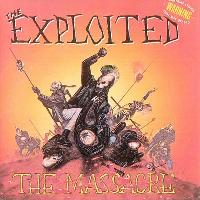 THE EXPLOITED – The Massacre

First up is 1990’s ‘The Massacre’, which includes 4 bonus tracks. This record saw the band further developing the crossover thrash style introduced in ‘Death before Dishonour’ and pursuing a more streamlined feel. In terms of sound, this means things sped up a bit and skank beats were used more heavily. The d-beats that characterised the UK 82 sound pop up every now and then, but the emphasis is more on a tighter, quicker feel rather than the powerful, brawling vibe of the earlier output.

As usual, the lyrical content reflects what was happening politically in the UK at the time (the poll tax) as well as the perennial attacks on religion and the police. The riffs are all in the right place, and the only real problem is that some of the choruses could have been a bit stronger, as having Wattie just repeat the song title four times as a refrain isn’t always ideal.

Even though it was one of the band’s biggest commercial success to date, ‘The Massacre’ wasn’t always popular with the old guard, who thought it was a bit far removed from the band’s Oi days.