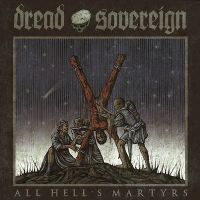 ‘All Hell’s Martyrs’ is the debut full-length from Dublin doomsters Dread Sovereign. The band features Primordial’s Nemtheanga on bass and vocals and Sol Dubh on drums along with Bones from Wizards of Firetop Mountain on guitar.

By this stage you’ve already checked out the score and know that I’m not 100% convinced by this one. So here is why. I should start by saying that I am a fan of epic doom and Dread Sovereign do a really excellent job of creating a doomy, middle-ages atmosphere. There are some pretty cool riffs and Nemtheanga does his usual top-notch job on vocals. At times he rails against the cross while at other times he chants up a storm, making the listener feel as if they are at the back of a crowded, incense-filled chapel as judgement is being passed on the heretics.

One thing that contributes to the authentic-feeling atmosphere of this release is the addition of a number of small intro-type pieces. However, these get a bit jaded after repeated listens. Add to that the length of some of the songs (averaging nearly 10 minutes each for the non intro pieces). Most of these tracks feel a bit long for what they are, so you sometimes come back to your senses and wonder what the hell has been going on for the last five or ten minutes. It reminds me of live albums from the 70’s and early 80’s. Remember when Richie Blackmore would go off on a 12 minute solo that would have most modern listeners reaching for the fast forward? Or when Ronnie Dio would go into a ten-minute ‘Heaven and Hell’ crowd response part? There’s the same kind of effect – as if the band have wandered off the track and into the trees. This is obviously a stylistic choice by the band, and I can see that it will appeal to some. But the approach is a little too indirect for these ears. For my part, I think the music needs to be floated on a raft of more traditional solid-rocking doom to anchor the listener and create impact points. As it is, the disc as a whole feels a little too unfocussed, a rambling meditation that never really rise above being a mere side project.

KING OF TROLLS – The Cave