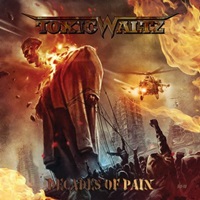 Five years after their formation, German quintet Toxic Waltz finally release a self-financed, self-released debut album with "Decades of Pain". The band live for the glory years of Bay Area thrash, more with a clean power spirit a la mid-tempo Exodus or the chunkier riffs Heathen employ on these 8 songs. Sometimes the guitar work of Jimi and Alex rivals the best "Forbidden Evil" days of Forbidden along with early "Pleasures of the Flesh"/ Exodus- check out the triplet free flow stop/ start action and crazy leads on "Toxic Hell" or the careful trailing accents and killer cymbal/ snare hits on "Green".

Angelo on vocals leaves a little to be desired with his throaty, hardcore-oriented roar – I think he would be perfect for Pro-Pain, but appears out of place in this impressive a thrash band as the musical display outweighs the melodies by a landslide. Are Toxic Waltz re-writing the playbook? Not by any means… but once again, those who love dual guitar harmonies that dazzle at slow and shred paces and a firm foundation in latter day Bay Area thrash (circa 1987-1990 to these ears) will probably look beyond the vocal limitations and dig Toxic Waltz easily.

When will the current thrash resurgence slow down? I would imagine that it’s getting to a point where too many bands in the same genre will result in burnout once again… so these Germans need to be firing on high in all sectors (production, songwriting, performances, and packaging) to stand out from the masses. For now, the good outweighs the bad, leaving me in the curious camp with "Decades of Pain".

MEGASCAVENGER – At the Plateaus of Leng