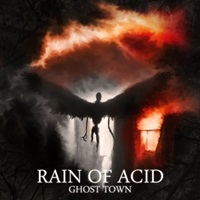 Scandinavian melodic death metal has a distinct charm- probably due to the dark winter nights and melancholic atmosphere that seems to fuel a desire to play in this style. Channeling the emotions into a musical direction that benefits both band and consumer, we’ve heard some incredible works in the past few years from Finnish bands like Before the Dawn, Omnium Gatherum, and Wolfheart among others to take this sub-genre to new heights of critical respect and underground popularity.

Rain Of Acid hails from Vaasa, Finland, a four piece now releasing their second album "Ghost Town" – with ties to Wolfheart as their producer Tuomas Saukkonen also performed drums on this latest record. Expect very tight arrangements with songwriting that is very lean but packs a wallop: with no song over 5 minutes, material like "Broken" and "Unchained" feeds off the extreme intensity of guitar harmonies and diverse mid-tempo to blasting drum parts – along with interesting instrumental passages that can be slightly atmospheric and jazzy to shake things up. Guitarists Esa Uusimaa and Sami Sandberg know when to steamroll with thick rhythms and also offering killer melodic hooks that just circle about the sonic landscape and stay with you for weeks on end: check out "Unveiled" and the stair step stunner "Lobotomy" (classic In Flames here).

Tuomas’ knowledge and skill set benefits Rain of Acid as the sound rivals the best in the genre- and you do hear elements of his work from Before the Dawn/ Wolfheart in the slower, punishing sections of "The Closure" while the ending title track is another highlight- the atmospheric, clean transitions making the heavier growls and double bass/ guitar interplay that much more effective. "Ghost Town" should be essential to those who live for Scandinavian melodic death metal- and probably will be on the radar for many year’s end best lists, mine included.