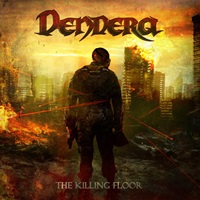 At times the sheer multitude of bands and music at our disposal in 2014 can leave you shell shocked. Streaming avenues, subscription models, ubiquitous social media sites that add new material 24/7/365 – it can be difficult to take everything in and still make sense of it all. Thus when I had the chance to read issue 7 of Iron Fist magazine from the UK and read a little article about this UK traditional heavy metal/ power outfit Dendera, The five-piece have gained a buzz in their few short years of existence, releasing an EP "We Must Fight" in 2011 plus gaining support slots with Grand Magus, Saxon, Firewind, Alestorm, and UFO to name a few.

"The Killing Floor" is their debut full length, an 8 song/ 45 minute plus record that appears to fence sit between a lot of their domestic veterans in terms of influence along with an American power attack that Megadeth and Iced Earth are well known for. Vocalist Ashley Edison has a multi-level melodic range, evoking thoughts of Matt Barlow, Rob Halford, and Bruce Dickinson at times through songs like "My Mercy", the Maiden-like mid-tempo charger "Hatechild" and militant "Bridges Will Burn". It’s refreshing to hear a band use simpler chord constructions that promote waves of fist banging- check out the Savatage-like chug in "Till We Fall" as well as lead breaks that aren’t always about thousand notes per measure arpeggio flashiness.

I can see why the band are making an impression on international bands when they perform live. The vocal background harmonies are spot on, the songwriting dynamic while keeping things moving along at a fair clip, and musically you will think of the strongest songwriting in Iron Maiden and Judas Priest’s catalog careening headlong into Iced Earth and latter day Megadeth to form a potent musical experience. Even bassist Bradley Edison get the chance to showcase his skill set in the exotic "Senlac Hill" where guitarists Steve Main and Tony Fuller lay down a wall of twin syncopation parts.

So while you may seek out the veterans to fill your metal needs, do not forget that the younger upstarts have something necessary to add to the equation- and Dendera is one of the best I’ve heard from anywhere (not just the UK) in quite some time.