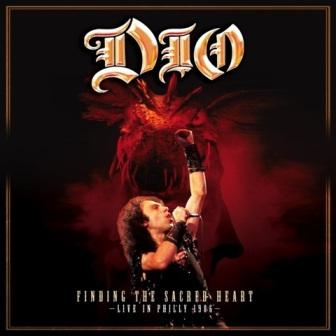 Being a big fan of nearly everything related to the late, great Ronnie James Dio, which is to say Black Sabbath, Elf, Rainbow, and DIO, I was quite pleased when «Finding the Sacred Heart – Live in Philly 1986» saw the light of day some months ago. This 2-disc release contains an entire show from the Sacred Heart tour when the band was firing on all cylinders. Craig Goldy had come on board as the band`s new guitarist and replaced Vivian Campbell, and he did a great job at that.

The recording itself is slightly raw and unpolished in places, which makes it all the more exciting and awesome to listen to. Nothing sounds touched-up or edited or some shit like that, and if you close your eyes, you can almost imagine yourself being there. The entire band was in great shape and the selection of songs is just brilliant. Having heard quite a few DIO live recordings over the years, I must say that it is a treat for me to listen to the extended version of "Sacred Heart", "Like the Beat of a Heart", "Hungry for Heaven", and "Time to Burn". They sound excellent in a live setting. The medleys are also wonderful to listen to, and the only ones that don`t get my pecker up in the air are the drum-, guitar-, and keyboard-solos. They just don`t do anything for me. Other than that it`s all good

«Finding the Sacred Heart – Live in Philly 1986» is a great historical document in that it shows a band on top of its game, and the atmosphere of the show is simply mind-blowing at times. Strongly recommended if you`re into DIO, Rainbow, and/or the mighty Sabbath!