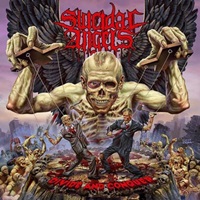 Consistency counts in the metal realm. Fans have certain expectations when it comes to their favorite bands, and the ones who remain steadfast in their stylistic beliefs usually gain the most adulation. Out of the newer breed of thrash bands, especially hailing from outside the North American shores, Greece’s Suicidal Angels appear to be solid in their brand of mid-tempo to speedier thrash, moving up the festival slot ranks and also touring with a lot of the bigger veterans in the business such as Kreator, Overkill, Death Angel, and Exodus.

"Divide and Conquer" is the quartet’s fifth studio album, and the band isn’t going to change course anytime soon in their attack. Those who love Slayer-esque meets Dark Angel heads down speed drumming where the guitarists pick their instruments with fury and the vocals match the intensity of the music, then check out the title cut and "Terror Is My Scream" for serious carnage damage. Where there appears to be a slight expansion in terms of technique is in arrangements such as "Seed of Evil" or "White Wizard", songs that in the 6:56-8:49 range that give the musicians more of a chance to expand their instrumental thoughts with more intricate riffing, assembling the parts in such a way to develop more screaming/ shouting / pit action from the worldwide thrash contingency.

Guitarist Nick Melissourgos as a vocalist has that acidic, spitfire attitude and personality necessary to convey words of hate, injustice, and death – keeping up toe to toe with the best of Max from Sepultura to Tom from Slayer in winning cuts like "Pit of Snakes" and "Lost Dignity". The production quality is clear and crisp without being too over-processed: just the way I want to hear my thrash! The cover art with skull adorned politicians being marionettes to a ‘skull master’ tops off the final product in classic fashion.

Growing up through the original thrash wave, I’ve never lost my taste for the speed, the tempo-changes, the intensity, and the enduring quality of the style. Suicidal Angels may not be really adding anything ‘new’ to the genre, but they perform and write high quality material, and that’s what matters in the long run.