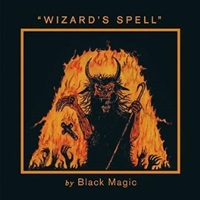 A Norwegian duo with a debut album release that appears to be a final call to arms, as information about the group is minor at best. The 9 track record contains a NWOBHM foundation, along with elements of speed and thrash metal at times – the guitar work finding a comfort between Angel Witch, Iron Maiden, and Mercyful Fate. "Voodoo Curse" is a killer 5 minute instrumental with galloping riffs, and major/ minor tension during the time changes – and following things up with the thrashier "Thunder" will have many thinking of the early 80’s US metal movement.

Understand that the production quality is barely above rehearsal room tones at best, burying the bass behind a guitar/ drum montage- and the vocals are serviceable at best. Ardent, must own everything in the traditional sector will champion Black Magic as defenders to the true cause- but I honestly didn’t find much about "Wizard’s Spell" that hasn’t been heard hundreds of times before from better acts like Omen or the almighty Iron Maiden.

Top it off with cover art that rivals the debut album from Sweden’s Wolf for the comedy factor (albeit unintentional from the band’s perspective I’m sure), and you understand why Black Magic’s demise isn’t that surprising after 2 demos and this record.