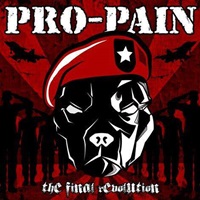 The fine line between creativity and consumption has always been a struggle in the music world. Especially once you establish a die-hard following, the difficulty lies in how much can you stretch outside the box without losing the original supporters? In the case of hardcore/metal act Pro-Pain on their 14th studio album "The Final Revolution", it is evident that the quartet knows that a raw, primitive, and down to earth sound that is heavy on gang choruses, monster grooves, and to the point writing matters most.

You get 12 songs in 36 minutes with 7 of the tracks not even hitting the 3 minute mark. You love Gary’s trademark bark with menace still carries "Can’t Stop the Pain", "Deathwish", and up tempo killer "Mass Extinction". You savor the quick hitting solo work from lead guitarist Adam Phillips on "Southbound" and the head bob mania that is "All Systems Fail". There’s nothing super fancy or technically blazing about this record- and that’s one of the beautiful things about it. Pro-Pain knows that their fans want songs that will make the adrenaline pump from top to bottom, get them singing along in unison with the choruses and lyrics, and leave with the knowledge that any stress has been released in a healthy manner.

For those not in the know about Pro-Pain, if you are familiar with Biohazard and Madball, this is in a similar vein – and as far as I’m concerned one of the best back to basics albums in their career. "Foul Taste Of Freedom" holds a special place in my collection back in 1992, and "The New Revolution" reminds me of the need for more Pro-Pain in my life.