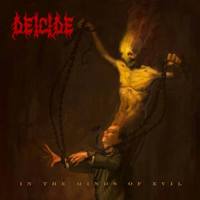 Every now and then I try and get into Deicide, but it never really works for me. I tried back in the early 90’s with ‘Legion’ and even as recently as ‘Til Death Do Us Part.’ While I like some of the records, I never really got into them as a band and they became another act whose fame doesn’t make a whole lot of sense to me. Not a band that I have any particular problem with… just a band who I never felt were as good as others said they were.

I’m sorry to say that it is largely the same with this record. For a start the vocals are too static, missing just about every opportunity to add emotion and definition to the tracks. They are a texture and nothing more. Secondly, there is absolutely nothing threatening about this record. I never feel that Benton and co. want to rip out my entrails and write ‘Satan’ on my wall with them. So, "In the Minds of Evil" is a bit tame for my tastes. It doesn’t do much in terms of speed either (yes, it has fast parts but they don’t blow the face off). Plus, there are only one or two riffs that really stick in the memory and give you a thrill when they come around again.

Hmm… sounds pretty bad. But there is something indefinable that I like about this album. The guitars are quite layered and the overall vibe is of a quite relaxed, middle-aged sense of evil, if that makes any sense (remember Benton is 46 and has been doing this since the late 80’s). I’m 42, so that makes sense to me! So despite what I said about the record being too tame, it is a nice place to be. While the more grooving, slower parts aren’t the most original on the planet, they are so consistent in the feel they create that they envelope the listener and draw them in. On top of that some of the guitar work is outstanding too.

"In the Minds of Evil" is deceptively simple, and better than it appears on the first few spins. It is a record that calls for patience and openness. I started out thinking it was going to score about 3.5, but it has fought its way up to 4.5 after 20 spins, and remains a record that I feel compelled to listen to and a record that I am enjoying a bit more each time.