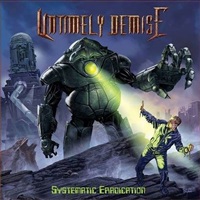 Canadian quartet Untimely Demise gains an Italian record deal and issues their second album, the 8 song, 34 minutes and change "Systematic Eradication". Their style crosses the lines of thrash and death- occasionally going for the latter aspect in spurts vocally through guitarist Matt Cuthbertson or some of the riff twists that Matt and fellow guitarist Sam Martz employ. Most of the time though, the reference points are clearly Bay Area oriented: Megadeth, Exodus, and Testament three bread winners in "Somali Pirates", the drum/guitar stop-start monster "A Warrior’s Blood" and follow up mid-tempo double bass number "Revolutions".

"The Last Guildsman" opens with some killer shred parts before Matt’s Death-oriented roar careens against the mid-tempo crunch. Production duties from Glen Drover (ex-Megadeth) keep Untimely Demise with a sharp attack and the Ed Repka cover art has that futuristic robot/ terror angle that should give listeners a clue of what to expect. The quartet is adept at not beating any part of their arrangements into the ground, but also knowing when they need to change their speed and tempos to keep you banging away.

Having not heard their debut album "City of Steel" (recently re-issued by the same label), I would say "Systematic Eradication" is a decent take on an established sound in the thrash genre- along with vocals that are little more extreme than most. With no ballads or commercial aspirations within ear shot, Untimely Demise shouldn’t have an issue appealing to the deepest fans in the metal community.