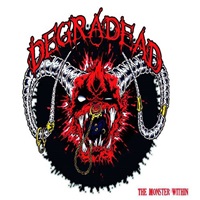 Many take for granted the importance of a consistent lineup in terms of a band’s ascension up the metal ranks. People lose faith in an act’s reliability if it seems like there is constant fluctuation between who is in and out of a group between records. So it is refreshing to deal with Sweden’s Degradead, for 4/5 of the lineup have been along the melodic death/thrash metal landscape since their 2006 inception. Only drummer Amit Mohla as the new recruit last year is the minor difference as we take in the fourth album "The Monster Within".

The band still worship at the altar of In Flames and Soilwork, although a lot of the pop-oriented choruses possess a decidedly American friendly aspect (check out "Dead Becomes Alive" and "Strive to Struggle" for those Sunset Strip hard rock elements), but there’s just something endearing about the ripcord harshness when vocalist Mikael Sehlin busts out the fierce screams and inhuman roars. The upbeat thrash comes into play from a rhythm section standpoint, not necessarily pure Bay Area with intent but another slice of European grace and class. "Scars of Misery" rules from a stair step riff standpoint, guitarists David Szucs and Anders Nystrom tight as a whip and can move from heads down speed to these drop on a dime groove elements guaranteed to make audiences go mad.

The commercial parts could be deal breakers for some (if so, you may wish to skip the lighter, tasteful 6:48 ballad "We’ll Meet Again"), but I really think the scales tip in favor of the old school heaviness so that Degradead will never be considered a melodic death/thrash band who desire to reach for the metal-core lowest common denominator fan base. If you can’t get enough of the melodic death/thrash sound from Sweden, "The Monster Within" is worth your time- please do not keep this act under the radar much longer.