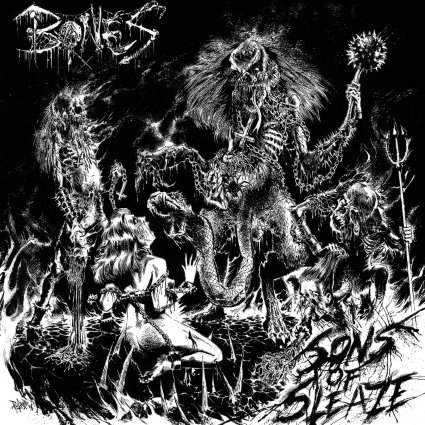 Chicago based trio Bones follow up on their S/T debut from 2011 with a dark, raw and downright gritty output fittingly branded "Sons of Sleaze".

This is not for fans of neat and clean autotuned/triggered death metal because Bones do everything they can to sound just the opposite.

The speed is chaotic (in a good way) and the overall sound resembles primitive conditions. This makes "Sons of Sleaze" an album that you must give a couple of spins before you break the formula and recognize the beauty of it.

The crispy and uneven vocal fits the music just perfectly and you can not provide any other form of vocal on this background of crust.

Bones put everthing into the energy department and little is left for finesse even though there are some solo´s here and there that squeeses the last out of the primitive riffings. This is death metal for those who favor the genre as an pure underground thing. No fancy stuff or anything elegant here, just real death metal, pure and simple.

EAT THE GUN – Stripped to the Bone