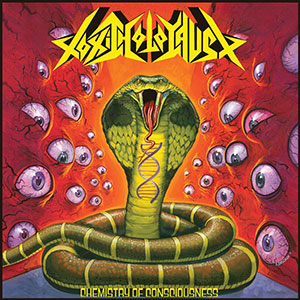 Joel Grind is back with Toxic Holocaust´s fifth full-length "Chemistry of Consciousness", the follow up to 2011´s "Conjure and Command". (Toxic splits and EP´s are to many to mention).

I had some difficulties getting into TH first time I heard his debut (yes, Joel startet TH as onemanband) back in 2003 but his music grow on me and today I must say I really enjoy a massive dose of speed/thrash Toxic Holocaust.

Joel´s vocal is one of the highlights (again) of TH. His gritty and almost black metalish voice fits the tempo of the music well without sounding straining.

Personally I think most of TH music is sounding the same (not meaning I dont like it or find it entertaining), it´s just that all the songs are built after the same formula.

Full speed ahead with blasting drums and ultra fast riffing layered with a semi distortion to appear muddy and "old". Absolute nothing wrong with it, the songs are all short and intensive and works out splendily both on their own and collectivly as a album so why change a good think when it works?

If you´re familiar with Todic Holocaust you´ll know what to expect and "Chemistry of Consciousness" fits well into their exsisting massive back catalogue.

No suprises or anything fancy, just fast and heavy speed/thrash metal the way we all like it!