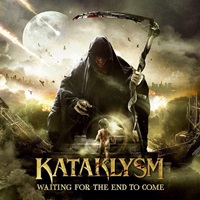 KATAKLYSM – Waiting For The End To Come

11 albums in 22 years- Canadian hyper blast death metal act Kataklysm keep chugging along. "Waiting For the End to Come" sees Oli Beaudoin take over the drum seat for Max Duhamel while he takes care of his personal battles with alcoholism. Through the years the band has varied their attack a touch- no longer feeling the need to be purely all out blasting with every song, and often settling into a mid-tempo death mode, but not forsaking the gruff, non-compromising vocal delivery from Maurizio Iacono that will keep Kataklysm away from commercial acceptance.

If you prefer the intense side of the quartet, fear not as "Fire" and "Empire of Dirt" will definitely get adrenaline spiking at peak levels. Yet those who like variety with their death metal music might enjoy the stomp of "Dead & Buried" and the slightly melodic/ Metallica guitar nuances to "Kill the Elite" a touch more. Guitarist Jean-Francois Dagenais layers his parts with a special Northern touch, "The Darkest Days of Slumber" opening with a series of ominous chord choices before leveling the playing field with this low-toned thickness that is sure to incite walls of death or pit action all across the globe.

Not all is well to these ears though- "Like Animals" containing a series of squeals that may work in the staccato ‘power’ groove world, but is a little too predictable and something I would expect from a newer band of the genre, not one with such seasoning as these Canadians. And there is just something about the triggered bass drums that needs a little modification- I realize it’s the norm with this style, I just prefer as ‘real’ or natural of a sound even if it’s not pristine and perfect sounding.

The good outweighs the band- "Waiting for the End to Come" is an album with more mid-tempo heaviness, which makes the speed elements stand out more.