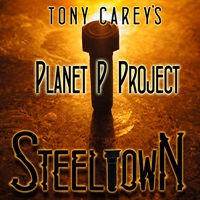 Most in the rock community know Tony Carey best either for his keyboard work in Rainbow from 1975-1977 as well as a couple of solo hits he had in the 1980’s with "First Day of Summer" and "Fine, Fine Day". Here he is with Planet P Project on their sixth album "Steeltown". To those not familiar with his work in this format, it’s a science fiction concept in terms of the lyrics, and very experimental in terms of the progressive rock on display.

"Steeltown" features 9 songs on the lighter, atmospheric spectrum. Tony’s melodies match the airy feeling with a Crosby, Stills, and Nash touch for "On the Side of the Angels", while the echo-laced keyboards and mechanized rhythms go hand in hand with this repetitive rhythmic motion that makes the title track very hypnotic- his retro voice again a throwback to Roger Waters during his 70’s Pink Floyd days. There is the occasional uplifting arrangement to give the album some pep, which happens on one of my favorite tracks with "Heavy Water" that has a very commercial hook and guitar riff that I could see blasting on a lot of adult contemporary radio stations.

Tony Carey’s Planet P Project would not be regular fare in the playlist department, but it’s a nice sonic departure when you want to sink into something a little lighter yet challenging all the same. "Steeltown" reflects its title, a 43 minute odyssey into a working class record.