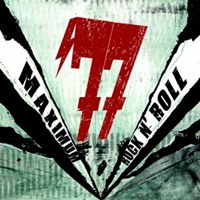 Heard this story before: brother guitar duo fires up their amplifiers in the desire to rock? Living at full volume, vocalist / guitarist Armand Valeta and his guitarist brother LG, along with drummer Dolphin and bassist Raw comprise Spain’s ’77 – already making a splash on the retro hard rock scene with their previous two albums "21st Century Rock" and "High Decibels". "Maximum Rock ‘n’ Roll" is their third full platter, another quick hitting 10 song record that makes you close your eyes and think about Bon Scott-era AC/DC as if we never lost the legend.

I do think as the band gain more of a foothold on the scene, they are willing to experiment a little bit within their confines, as the sleek guitar/drum groove within "Jazz It Up" as well as the 50’s style roots approach to "Don’t You Scream" gives ’77 a chance to be high energy in a left of center way. Overall though, songs like "Highway Rebel" and "Virtually Good" will not be mistaken very far from the Young brothers territory, rich with Gibson SG charm and often witty ways of lyrical delivery.

Vintage isn’t wrong when held in the right musical hands, and as such "Maximum Rock ‘n’ Roll" provides good natured, down to earth entertainment. Recording live in the studio to capture proper hard rock chemistry, ’77 has another strong record on its hands- ready for road approval. Those into AC/DC and Airbourne, here is a quartet that would slot in nicely for that retro, blues-based boogie hard rock collection.