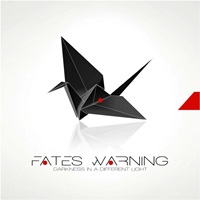 9 years is a long time to wait for a studio album in the metal industry. Be aware though that for many members of progressive metal veterans Fates Warning- it’s not like they were sitting away comfortably leading a normal day to day existence off the road. Ray Alder has been singing with Redemption since 2005, recording albums and touring on a regular basis. Bassist Joey Vera does a lot of production work and studio sessions with other bands when not busy with Armored Saint. And main songwriter/ guitarist Jim Matheos recorded a few albums with OSI and brought early Fates Warning singer out of retirement for the fabulous Arch/ Matheos album "Sympathetic Resonance".

Beyond their touring escapades in Europe and North America from time to time in the interim, we finally get the eleventh record "Darkness in a Different Light" – an album that introduces new drummer Bobby Jarzombek for the first time on a FW record. Truth be told I haven’t been fully satisfied with a studio record since 1997’s "A Pleasant Shade of Grey" – as 2000’s "Disconnected" and 2004’s "X" appear to be transitional records with more streamlined parts and modern/ electronic elements at times that distance themselves from what I enjoy most about the band. After numerous spins, I believe the band are taking steps in the right direction to bridge the gap between the past progressive glory and the modern present technology steps – to varying degrees of appeal.

When things are clicking with Fates Warning, you get material that pins your ears due to the multiple part angles that converge correctly- the opening Aresti/Matheos guitar twists and turns against a relatively straight forward Jarzombek drum beat on "One Thousand Fires", the brief 1:34 semi-acoustic ballad "Falling" with Ray offering a poignant low range delivery and the brilliant songwriting master class offering that closes the record with the 14:03 "And Yet It Moves", shades of "The Ivory Gates of Dreams" here in attack, pacing, and fluidity. In certain parts though, the band seem to go for more of a refined, almost alternative/ semi-Alice in Chains feel, "Desire" and "Kneel and Obey" most indicative of this dynamic, and I find my mind wandering a little bit despite brilliant drum work from Bobby.

I realize Fates Warning in 2013 will not return to "Awaken the Guardian" or even "Perfect Symmetry" heights of creativity. "Darkness in a Different Light" proves they can still perform at a high level- you just wish Jim would continue channeling the progressive sides of his brain and let go a little bit of the down tuned/ modern fixation, as the long-time fans would welcome the aural challenge. Hopefully this inspires the band to get a 12th album out in this decade, and see where their playing takes them.