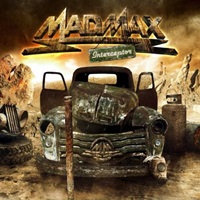 German hard rock with a slight traditional metal slant is in full effect from Mad Max. "Interceptor" is the 11th studio record, another 10 song effort with sights squarely set on bare bones hooks, bluesy vocals, and guitar riffing/ rhythms made to get you out of your seat and move. You’ll get 8 new tracks, an updated version of "Show No Mercy" that originally appeared as a bonus track on 1987’s "Night of Passion", as well as a cover of "Turn It Down" from Sweet that first came up on the European version of "Desolation Boulevard".

Overall, expect a sound with thick vocal harmonies in a Def Leppard meets Sunset Strip manner, vocalist/ guitarist Michael Voss possessing a comforting commercial twinge to his melodies. Fellow guitarist Jurgen Breforth has a ‘less is more’ way to his chord choices, supplementing the sound in a very complementary way to the mood and needs of every arrangement. A couple of songs on here have a little bit of inspiration from Michael Voss’ touring escapades with the Michael Schenker Group, "Streets of Tokyo" and "Godzilla"- both highlights on this album with driving riffs and equally engaging melodies that bring back the heydays of melodic hard rock/ metal in the late 70’s to early 80’s.

The ballad "Five Minute Warning" has an eerie texture to it that builds with an MSG meets Def Leppard feel- another highlight because of the interesting drum fills from Axel Kruse and comforting bass parts of Roland Bergmann. Ending on a fun note with "Turn It Down", Mad Max just put out their songs from the heart- intent on delivering good time entertainment for those who love melodic hard rock.

Nothing out of the ordinary, but I know there is a segment of fans that yearn for the four on the floor hard rock sound- and Mad Max is doing their job to keep the movement alive.

MAELSTRÖM – Slaughter of the Dead