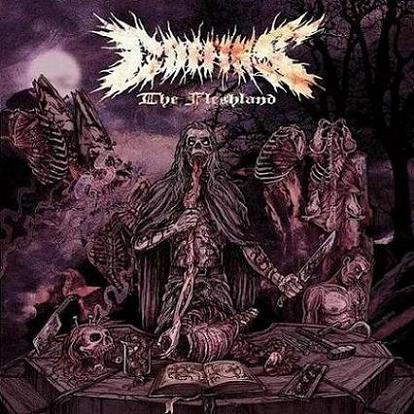 Japanese doom/death outfit Coffins did everything right on their debut "Mortuary in Darkness"(2005) and on follow-up "The Other Side of Blasphemy" (2006).

Their mix of necro laden doom combined with ultra vilolent death metal packed in an ugly sound of distortion did work out splendidly and both albums have been on heavy rotation since their releases.

"The Fleshland" is Coffins fourth full-length (I have not heard "Buried Death") and I am to some degree a little dissapointed. They continue in the same vein that I have been acustomed to but fore some reason they do not manage to pull out the evilness that they did earlier.

The songs are of the same known formula, riffing it to the max with both keeping it old sounding and primtive fresh at once. The vocal is the same as before but again, it does not reach their previous watermark of quality.

The foursome deliver on both intensity and atmosphere but their melodic aspect is weakened a lot.

"The Fleshland" is a good enough doom/death release on it´s own but compared to their previous hellish outings it does not make the same impact.

It feels like it´s been done before just on a poorer scale of grim heavyness.

Of course not everything should be measured against previous efforts but if your´re curious to what Coffins can deliver, start with the two mentioned albums above first.

"The Fleshland" does not make it all the way but it´s way above better than a lot of other similar acts out there, and that counts for something, right?