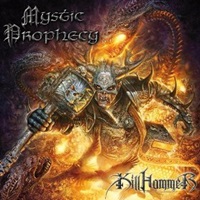 Success has a way of influencing veteran acts in mysterious ways. Sometimes inspiration fuels subsequent releases in a new direction, often hoping for wider audience appeal. Most ardent metal musicians though carry a lifetime membership to the cause, so I wasn’t worried that following Mystic Prophecy’s touring escapades for 2011’s "Ravenlord" (which included their first US festival appearance at Progpower 2012) that the band would all of a sudden ‘sell out’ with their sound once gaining the chance to enter the studio.

The eighth album in their thirteen year plus career, "Killhammer" is another dynamic offering in the power metal field, straddling the fence of mid-tempo anthems with strong guitar hooks and R.D.  Liapakis’ soothing vocal range over the top on "To Hell and Back" and the title cut as well as some speedier, heads down efforts like "Armies of Hell" and "Angels of Fire". The guitar duo of Markus Pohl and Constantine slice and dice with this dual tenacity at times, setting up pure power chords perfect for synchronized fist pounding or windmill motions on personal favorites "Kill the Beast" and "Set the World on Fire". And in a continuation of the band’s affinity for the Black Sabbath/ Ozzy discography, the album concludes with probably the best known Ozzy solo song, "Crazy Train" – performed more like the live "Tribute" era than the original "Blizzard of Ozz" days.

"Killhammer" will not disappoint the Mystic Prophecy faithful. At this point in their career, maintaining what you have is just as important as creating something entertaining. This is an album that won’t shock and awe as much as just deliver down to earth power metal in the European tradition, in line with classic Brainstorm, latter day Firewind, and many Primal Fear offerings. Bravo gentlemen- continue hammering home the metal!