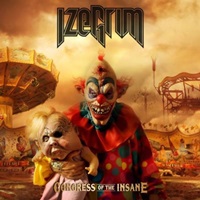 Feel the stench of guitar strings flopping due to their low tuning as the rhythm section rises and falls with thrash, death, and doom mystique- and then the maniacal growls and bark of bassist Marloes Voskuil cut through the sonic landscape to give Dutch band Izegrim a chilling edge to the proceedings. The quartet returns with a fourth album of non-commercial thrash/death metal- assuring the listeners a host of hair windmill, furious headbanging moments.

Guitarists Jeroen Van Heuvelen and Bart van Ginkel move their fingers with speed and precision, also inspiring many future lead players with their emotive breaks at times- check out "Celebratory Gunfire" and "Modern Day Freak" for some of their Arch Enemy/ Testament-like chops. There are times where you feel like the riffing and speed chaos is going to run off the train rails- "The Legion" after its opening chug-a-thon verse for instance- but somehow Izegrim know the right transition or melodic interlude to input that keeps the arrangement sustaining momentum and forcefulness. The death influences can run deeper into the UK scene such as Carcass and Bolt Thrower references in one of my personal favorites "Carousel of Death"- as Marloes sustains words with venomous contempt, she could easily peel paint from any walls.

43 minutes later your brain and body may be shattered and require healing, but this is for the greater good of the thrash/death movement. Izegrim as a unit possesses that underground attitude that we need more often- they don’t aspire to hit the same audience as the elite Megadeth or Lamb of God’s in the world. Seeing hundreds of bodies ebb and flow to the sounds of "Congress of the Insane" in live clubs everywhere works just as well. A great follow up to "Code of Consequences", keep up the good work Izegrim!