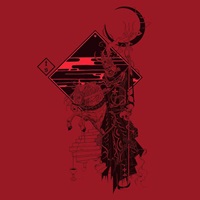 Four full lengths in five years- you’ve got to hand it to Norwegian stoner/ doom trio Tombstones, they let their creative muscles fly quickly. "Red Skies and Dead Eyes" is a 6 song album, clocking in at a reasonable 44 minutes given their propensity for locking onto a groove/ riff and driving it home into the ground. Expect a production with raw/ earth-like crust seeping through your listening device- powerful snare hits, guitars fueled with feedback and Ole Christian Helstad’s immense bass holding down the doom/ stoner fort.

The massive Sabbath meets Sleep riff-o-rama takes "King of Daze" to another world. The white noise/ keyboard opening against an offset lumbering drum tempo sends "The Other Eye" to a sort of mystical ether swing trip. Guitarist Bjorn-Viggo Godtland also doubles on lead vocals, and his penchant for drawing out sounds and words fits right in line with what Kurt Cobain would sound like if were still alive and fronted Tombstones. The band need to be careful liberally borrowing a certain opening segment like the one we hear on the title cut- even if it’s a touch slower, most will recognize the "Children of the Grave" strains.

Overall I prefer bands in this style who can hit upon riffs that just shake me to the core while also making my toes tap and hands want to air drum – and "Red Skies and Dead Eyes" did that more often than not. Tombstones have made a recording that exerts energy in all the right places, isn’t too polished, and gives a clear indication that they aren’t into the genre for commercial aspirations. So let all your dreary feelings subside into this soundtrack, which holds promise of a better tomorrow.