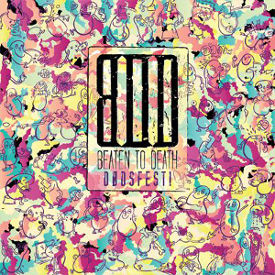 Norwegian grindcore is not something we are spoiled with so it´s always interesting when something new comes out.

We have a few established grind names in this scene and Beaten to Death is one of the newcomers that are starting to make an impact.

Their debut from 2011 "Xes and Strokes" did get an fairly good responds and after listening thru the follow up "Dødsfest", I must admit that it after a couple of spins gets better and better.

The influences seems to be from neighbours Nasum (Sweden) and Rotten Sound (Finland) and those are obvious choices since both now rightly can be called classics.

The tempo is grindcore de luxe with a lot of changes in both arrangements and speed. From max blast to just relentless blasting combined with a very varied vocal that I find to be the album highlight. I really got into the deep growls beetwen the standard high shrieks common to grindcore in general.

The songs are not too short, but all manage to get thru at least a verse, bridge and verse/chorus again.

The structure of the 12 songs that where in the promo I received (Metal-Archives lists a total of 21 in total) stay true to the formula but they all manage to sound original in its own way. The combination of fast bursts to some chugging parts and back to either a blasting or a bridge works out very well.

They also incorporate some melodic parts that they manage to fit nicely into the overall wall of noise structured as grindcore.

All in all it´s nice to hear some Norwegian grindcore, a scene I am not that familiar with but that will hopefully grow with bands like Beaten To Death at the steering wheel.