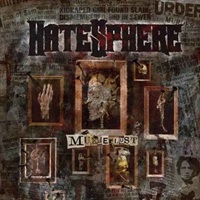 The veteran Danish death/thrash with groove act Hatesphere return to assault our eardrums with another studio platter in "Murderlust" – their eighth. The 10 songs that comprise this effort showcase an experienced, seasoned quintet locked into a style that they know works- brutal at times, melodic when called for, but never compromising their integrity and outlook on groove-aligned thrash with death tendencies.

"Murderlust" opens with tight triplet rhythms from Jakob Nyholm and "Pepe" (aka Peter Lyse Hansen) that recall the best work of Heathen and Artillery before gradually succumbing to a more comfortable mid-tempo level, while "Pandoras Hell" is a mix of up-tempo thrash with occasional hardcore-like breakdowns and melodic death twists in the instrumental sections. The band explore a slower, atmospheric crunch side with the 6:07 "Fear Me"- the slamming drum tempo of Mike Park Nielsen matching up beautifully to the vocal rhythm patterns from Esben Elnegaard Kjaer Hansen- something similar to latter day Nevermore that offers the listener a little bit of dynamic release.

And so the album moves along- Hatesphere give you plenty of riffs to head bang and slam to, favorites include the quick hitting stop/ start action of "Punishable By Death" and the whirlwind "Darkest of Forces" that impresses me most with the schooled lead breaks and piles of stair step guitar lines. Hatesphere possesses wide appeal because they inject the right amount of groove without pandering to obvious ‘metal-core’ breakdowns, and can be downright sick when they go for the throat in terms of speed and aggression.

Those who love Euro-thrash with a non-clean vocalist will appreciate "Murderlust" the most, a nice follow up to 2011’s  "The Great Bludgeoning".