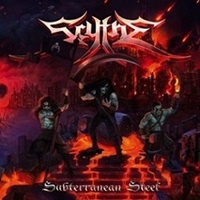 Arising from the demise of Usurper, guitarist/ vocalist Rick Scythe formed this blackened thrash trio, filling out the lineup with bassist Dan Geist and drummer Joey Contreras. On their second full length "Subterranean Steel" one can expect relentless riffs, raw natural drum tones, a thick bass that is 100% metal and Rick’s throat projection that is a montage of death growls and blackened screams- yet remarkably discernible.

The lead breaks within "Monarch" are one part Slayer, another part Sodom- and yet musically the arrangement contains the right balance of sonic juggernaut and finesse with the tempo actually slowing down by the conclusion. The short sound bite that opens "Leather Aggressor" gives way to a bulldozer guitar/bass/drum attack, much like you would expect from Hallows Eve or Cyclone in their early years. It’s refreshing to take in an album that you know hasn’t been a cut and paste affair with farmed in computer programs replacing the misfires or miscues from the musicians- because the intimate feeling you get with songs like "The Grunting Dead" and "Nights of Terror" isn’t around enough in today’s younger generation of metal bands.

"Subterranean Steel" isn’t going to receive mass acceptance- or probably critical acclaim- but I doubt that is what Scythe aims for when writing and recording this album. The primal instincts kick in when taking in this record- its roots deep within the early purveyors of thrash, death, and black metal- along with a healthy dose of Chicago spirit. Topping things off with a killer animation oriented cover, Scythe has a lot of heart in their sound and as such this will be a release I turn to often when I feel the need for speed, aggression, and viciousness.