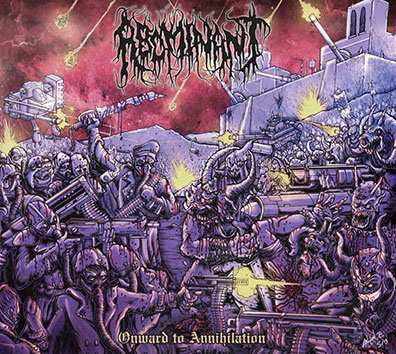 Kentucky´s death metal main boys Abominant is back with their tenth opus since the debut "Unspeakable Horrors" back in 1996 so it´s safe to say these boys keep a busy schedule.

"Onward to Annihilation" is a formidable piece of death metal, performed just the way you know it will.

Their formula have not changed much since 2010´s "Where Demons Dwell", an album I liked a lot but maybe thats the problem(?). "Onward to Annihilation" sound almost just the same as the previous release and that takes some of the sting out of it.

It´s not bad by any accounts, the heavyness is there, the evilness is there and the highly skillied musicians all do their best keeping the vibe during the 8 tracks. It´s just that I in my opinion it lacks anything new added to the table. I like most of what I hear and it is an excellent introduction to Abominant for those who dont know the band´s earlier work. For me it´s just "Where Demons Dwell" part 2 and I was hoping for something more.