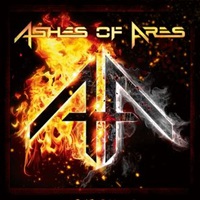 ASHES OF ARES – Ashes of Ares

Odds are in your favor that if you’ve followed the power metal world for any length of time (especially the mainstays in the North American scene), you know 2 of the players in this new band Ashes Of Ares. Vocalist Matt Barlow spent years in Iced Earth, and drummer Van Williams spent the bulk of his time timekeeping for Northwest juggernaut Nevermore. Add in bassist turned guitarist Freddie Vidales (who spent 2008-2012 with Iced Earth) and you now get a fresh act on the scene, Ashes of Ares.

The debut album contains 10 songs and will assuredly draw comparisons to their previous body of work. Overall though I think the guitar playing is a little more traditional sounding and not as speed pick driven as Iced Earth can be, and Van’s drumming is a touch more in the pocket and not as free flowing as some of the heavier / progressive moments required within Nevermore. The band feel comfortable at a mid-tempo clip- or slightly slower in the acoustic meets electric ballad "On Warrior’s Wings"- as Matt soars with that punch and huskiness we’ve come to know and love. An early favorite occurs in the middle of the album with "This Is My Hell"- a surprisingly killer acoustic guitar lead break opening that transforms into this monster power riff and Matt’s doubling up vocal harmonies that can be screamed from mountain tops the world over.

"Chalice of Man" sees Van flex his extreme percussion chops, probably the heaviest Ashes of Ares arrangement on here, while "The One Eyed King" contains a couple of parts that bring back "Flash of the Blade" from Iron Maiden in the guitar department. Ultimately how this band is received will probably take place on stages small and large when the band can tour behind their music. For now this is a great piece of US power metal, it’s great to hear Matt singing to the heavens and I think Ashes of Ares will pick up a decent following as a result.