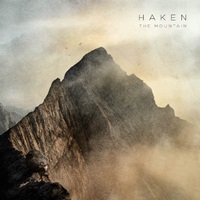 Opening this third album with a sparse piano ballad that evokes classic Queen feelings in "The Path", the sextet Haken think the time is now to broaden all horizons with their progressive metal thoughts. "The Mountain" is their debut for Inside Out Music, and a perfect addition to the label because the band uses every tool they can muster to deliver breath taking parts, dynamic arrangements, and stunning vocal harmonies that keep the ears percolating from track to track. The use of major and minor intervals and a stuttering rhythmic vocal verse element takes "Atlas Stone" into another universe, encapsulating the freshness of Genesis, Pain of Salvation, and the Moody Blues with heavier bombast and contrast.

Follow up "Cockroach King" sees Ross Jennings and his compatriots use echoing layers of vocals much like Yes would during their innovative 70’s period, as the keyboards subtly set the tone for this psychedelic, slow paced arrangement- including a killer pitch bending solo from Diego Tejeida that gives way to bassist Tom MacLean’s impressive jazz fusion break. The 9 tracks equally place emphasis on shorter constructs that get to the point quickly like the softer "Because It’s There" and emotional piano-oriented "As Death Embraces" as well as the longer more instrumentally challenging efforts like "Falling Back to Earth" at 11:51 and exotically aggressive "Pareidolia" that features occasional use of blast beats and insane guitar/keyboard syncopation against time signature manipulations that have to be heard to be believed.

I would say overall Haken take another bold step forward in the progressive rock/ metal category- because not everything has to be super intense and heavy to become innovative in this genre. Sometimes sparseness and contrast does wonders for the overall outcome of a song. This is for those adventurous souls who want to break out of the mold and take in something that incorporates all facets of the genre.