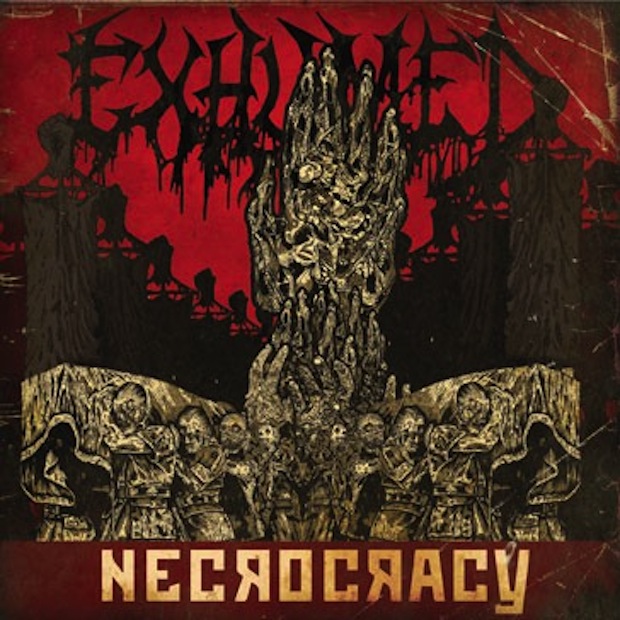 Exhumed had kind of a comeback in 2011 with "All Guts, No Glory". The foursome had polished their sound and added some melody to their gore metal (a term they coined with their debut of same name back in 98).

The demo’s, tons of splits and the debut sat the pace for goregrind/death metal but Exhumed never (in my book at least) managed to take it all the way with "Gore Metal".

The follow up two years later, "Slaughtercult" can be considered a classic these days but both releases where kinda ruff in the edges and focused more on the chaotic gore grind aspect than melody and arrangements.

The forementioned "All Guts,No Glory" saw the band take a new direction with added melodies, moro soloing and a much cleaner production. Said album did not hit right home in my camp it´s therefore very pleasing to put "Necrocracy" on play.

Matt Harvey & Co have taken the melodic aspect even further and sound like a more mature band now more than ever. The focus is taken away from the grinding and put more on the death metal with memoriable riffing, a cooler vocal that is easier to dechiper and where did all the solo´s come from?

They suddenly have added a ton of mid song solo parts that after a couple of spins actually fits the overall sound and compositions quite well.

The gore factor is still present but the lyrics are not as macabre as heard earlier and as mentioned, the vocal is just chief.

"Necrocrazy" is Exhumed´s sixth full-length and this is perfect starting point to get to know these american death metal pioneer´s if you´re into death metal with a touch of melody without being labeled melodeath (god forbid!).

My interest in Exhumed has been renewed with "Necrocrazy" and so should yours.