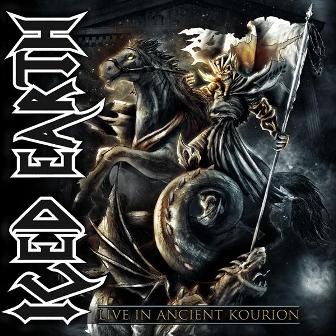 To be honest, I have not given Iced Earth´s studio albums much notice the last 10 years or so. 1991´s "Night of the Stormrider" is the only IE album that really hit home in my book but I did really like their second vocalist Matt Barlow much better than Greely that sang on that one. One IE album that have been given some playtime tough is 99´s "Alive in Athens" with Barlow on vocal. That live album really captured the energy of IE so I was wondering how new vocalist Stu Block would deliver when their latest live offering "Live in Ancient Kourion" came out earlier this summer.

The reason for "Live in Ancient Kourion" is of course primarly to get Stu Block´s name out there and show the non-belivers that he can follow in Barlow´s footsteps.

That he can with some degree do. He´s voice is very similar to Barlows but on some of the higher notes he seems a little more aggressive than Barlow and it does not allways fit the original track. Block have a death metal background and that is also noticeable on the softer parts where Barlow sounded more convincing but other than that he delivers good enough.

Of course can thins be dubbed and so on in studio and with todays recording equipment an live recording may sound just as fresh as a studio effort but nevertheless, Block is a good repleacement for Barlow.

The album spans 2 cd´s  with running time well over 2 hours so there´s a ton of material, both new and old where of course (for me at least) the older material is what works best. All the classics are of course present and mainman and chief Jon Schaffer is managing his troops to quite an enjoyable ride thru 20 years of power metal with strong influences from both thrash and heavy metal.

There´s really not much to say about "Live in Ancient Kourion". It´s a good live album that promotes Stu Block well and for those that thinks Matt Barlow is unreplaceable give it a spin (or not).