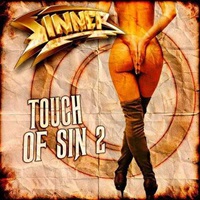 What do you do when your old master tapes are lost- or rather mysteriously burned in an accidently fire? In the case of veteran German heavy rock band Sinner, you figure the time is as good as any to re-record some of these classics, as well as round off the package with a few new tracks. So here we are with "Touch Of Sin 2"- a 14 track album featuring 11 re-recordings of 1980’s Sinner material along with 3 new songs in "Blood on the Sand", "Heat of the City", and "Don’t Believe a Word".

One of Mat’s criteria’s when it came to this album, which I applaud, is that all the members had to record this together in the studio- not in separate studios with computer file sharing being used. This gives songs like "Bad Girl", "Born to Rock", and "Danger Zone" a very energetic, jump out of your speakers spark. The triple guitar lineup of Alex Beyrodt, Christof Leim, and Alex Schlopp helps for a lot of clean/ harmonic interplay on the mid-tempo "Knife in My Heart" and bouncy "Masquerade". And "Shout" is a gallop-oriented anthem that giving drummer Andre Hilgers a chance to win over audiences with quick hitting snare/tom rolls and steady double bass action. In an interesting move, the 3 new songs are spread out across the album- "Don’t Believe a Word" has a lot of Thin Lizzy charm with Mat’s soothing, bluesy voice taking control in the chorus, while "Blood on the Sand" contains a lot of killer guitar licks and "Heat of the City" is just a down and dirty hard rock closer, the rhythm and riff perfect for screaming and shouting.

Debate abounds as the old timers remember the original versions and do not want these re-recordings to taint their eardrums, but the newer generation will not pay through the roof for bootleg copies or rarities. "Touch Of Sin 2" works just fine for me as I await the next Sinner full length studio album.