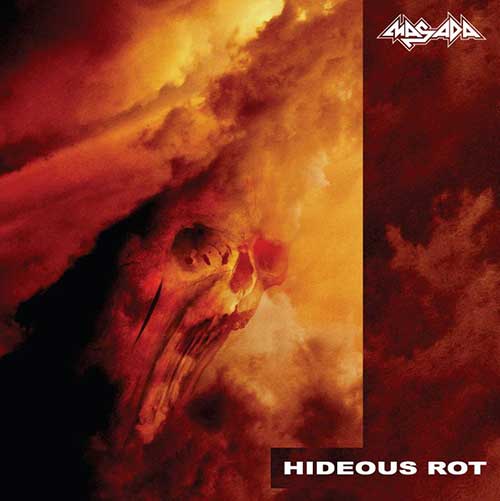 The US death metal force known as Masada is back. Not that long ago I reviewed their "Suffer Mental Decay" 2-track demo and I really liked that piece of raw, dark, and filthy death metal. "Hideous Rot" is a 5-track release comprised of 3 new songs and the two songs off the aforementioned demo.

There`s hardly anything new going on in the Masada camp compared to the "Suffer Mental Decay" demo. However, the second song on here, "Fluteotherapy", is a bit of a special one in that it was done by Clive Jones (Black Widow). It`s a weird, atmospheric piece that has nothing to do with death metal as such, but it certainly adds a bit of variety and originality to the EP. I haven`t really made up my mind as to whether I actually like it or not, but it`s different and a bit of a surprise nonetheless. The two new "metal" songs, "Hideous Cerebral Pulp" and "Exist to Rot", are pretty interesting and just as good as the songs on the "Suffer Mental Decay" demo, and the catchy riffs, nasty vocals, and pulsating bass lines are all there.

There`s something honest and organic about the recording itself in that it sounds like it was recorded live in their rehearsal space. This might turn some people off while others will love the unpolished and raw vibe of the whole thing. I personally like it in the sense that nothing on the EP sounds clinical or sterile. It`s dirty and disgusting, and personally I think it fits the songs rather well.

All in all we`re served 15 minutes of rotten, old-school death metal with an unpleasant vibe to it, and I can`t say that`s a bad thing in this case.