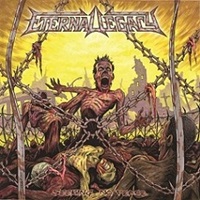 There’s something special about Cleveland metal. You can feel the blue collar work ethic pour through the performances, the songwriting, and the undeniable integrity for the cause at hand. Eternal Legacy is a quartet hailing from this active scene, plugging away nicely in the trenches for 10 years. "Seeking No Peace" represents their third full length studio album, a 9 track effort that clocks in at a palatable 40 minutes and change.

Their sound is on the cusp of thrash and power metal, with occasional flashes of neo-classical lead breaks to up the musicality factor. Artists like Iced Earth, 80’s era Metallica, and unsung bands like Heathen or Metal Church come to mind the most when taking in strong material like "Greed", the mid-tempo head crushing "Cauterize" and guitar harmony blazing "First Murder". Rhythm guitarist Jason Vanek handles the vocals, and it shouldn’t be surprising that he receives a lot of comparisons to James Hetfield, a comfortable fierce mid-range in his melodies and phrasings that is 100% metal- but I also hear a little bit of former Wrathchild America singer Brad Divens in some of his personality and enunciation. "Lie" is an interesting track as well, opening softly with acoustic guitar strumming before twisting into more of a dark, heavy ballad that features an ominous chord structure and equally chilling rhythmic tempo during the chorus.

Eternal Legacy may not be the fastest or trendiest band in metal- they live for more of a traditional power stance without a lot of blazing imagery or extracurricular studio tomfoolery to mask any deficiencies. An excellent release, one that should find favor in many collections because it is true to its ideals- the focus maintained on strong hooks, killer melodies, and solid metal through and through.