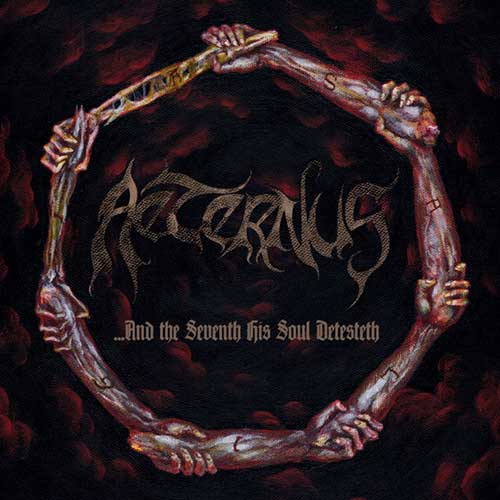 The well-known Norwegian dark metal force known as Aeternus have returned with a follow up to "HeXaeon" (2006) and it`s good to have them back. Their back catalogue is a bit hit-or-miss with me and I don`t like all of their previous offerings, so naturally I was a bit curious as to which category this new album entitled "…And the Seventh His Soul Detesteth" would fall into. Let`s have a look, shall we?

The gentlemen in Aeternus obviously know how to blend and mix black and death (and even a hint of doom) metal in order to create a brutal and yet varied sonic assault, which is most evident in songs such as "The Hand That Severs the Bonds of Creation", "There Will be None", and the title track. The epic "Saligia" is another highlight on this disc, partly due to that mellow and beautiful mid-section as well as the outro-bit. The song "Hubris", which is to be found halfway through the disc, is an all-out mellow and melancholic piece with a strange atmosphere to it. It`s quite interesting.

The vocals and drums are quite dynamic and diverse, but I would have liked the guitars to be a bit heavier and punchier, but on the other hand I quite like the somewhat raw sound they possess. I guess you can`t have everything, eh? The lead-guitar parts are generally quite good and some interesting harmonies are to be found throughout the album. They certainly add some depth and substance to the riffs played by the rhythm guitar. Going back to the vocals again, check out the song "The Confusion of Tongues" if you need proof that they aren`t one-dimensional.

The song titles lead me to believe that the lyrics are pretty interesting in places, but given that they`re not included in the promo package that was sent my way I can`t really comment on them.

All in all I think this album is pretty good and I`m quite sure that fans of the band won`t be disappointed with this output. It is certainly one of their better albums yet. However, it`s not a must in my opinion and we`re not talking buy-or-die here as there are a few songs on it that don`t do much for me, but black/death metal freaks should definitely check this one out regardless of that.

The limited edition version of "…And the Seventh His Soul Detesteth" includes an awesome bonus; the "Dark Sorcery" EP from 1995.