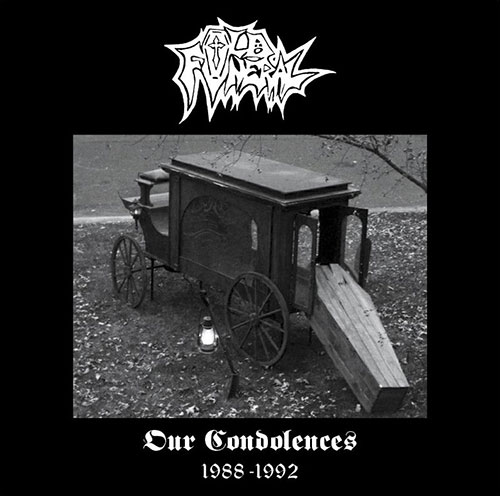 Old Funeral where a death metal band from Bergen that where active only for short period of time. They may be mostly known for having members like Varg Vikernes, Abbath and Jørn (later in Hades Almighty) in their early ranks before all of them ventured forward into black metal.

The only managed to release a couple of demos and one EP but goddamn that EP is good, even today almost 25 years later.

"Our Condolences" contains both demos, the mentioned EP, some unreleased tracks and some live performances spread over two cd´s.

The first demo "The Fart that should not be"(89) is a fairly primitive recording where both the music and the musicians show that they´re quite young and that shines thru on the material. The raw, unpolished sound does neither help on the overall impression but there are a couple of aspects that show that this is just the beginning.

The next demo "Abduction of Limbs" is a big step up on both song progression/arrangements and overall feeling of the dirty old necro death metal that came to be around 1990 when the likes of Autopsy contributed to making it just disguisting enough to be just awesome. The three tracks on this demo still holds the test of time today and really show a band that had a big potential (even though they where from Norway and not Sweden).

In 91 Old Funeral unleashed what is in my humble opinion one of the best releases in early Norwegian death metal history.

"Devoured Carcass" only contains three songs but they are so massive in sound/production and performance that it´s enough to stunn even the most seasoned detah metal fantatic. They´re primitive death metal is the prototype of what younger bands that are on the retro vibe today try to outdo each other with. Just necro enough to sound convincing and my personal favorite ingredient is the hints of grinding ala early Reek period of our beloved Carcass (UK).

The live recordings are amousing enough to enjoy but the beaty of this compilaton is as mentioned the demo "Abdcution of Limbs" and EP "Devoured Carcass" that are worth the admission alone.

If you want part of the early stages of Norwegian death metal, go get this right now.

This is mandatory listening, nuff said!