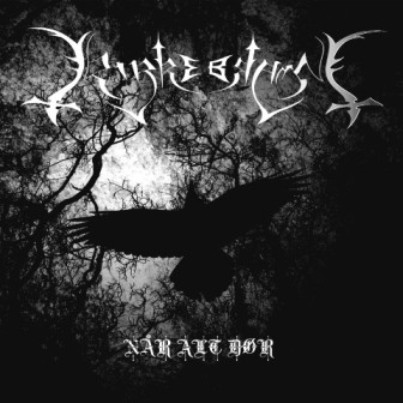 The Norwegian band named Kirkebrann mailed me a copy of their latest and first official full-length album entitled "Når Alt Dør" some days ago. As the band name, cover art, and song titles indicate, Kirkebrann perform old-school black metal that is clearly inspired by some of the first wave Norwegian releases dating from the early 90ies. Lyrically the band focuses on Nietzschean themes and philosophical ideas, which is nothing new or groundbreaking, but there`s hardly anything wrong with that. Most lyrics are in Norwegian while a couple of others are in English.

There are catchy melodies and riffs as well as well-structured and chillingly cold parts to be found throughout the album, but unfortunately there are too many rather uninspiring and bland parts to be found as well, so quite a few songs end up being neither good nor bad, but rather somewhat mediocre as a result of this. I quite like songs such as "Kvad til Mørket", "Tal Satan", and "Incoming" due to their melancholic and yet aggressive atmospheres. Those songs are definitely the ones that are most catchy and memorable to me, and they`re also slightly more varied than some of the other tunes on the disc.

"Når Alt Dør" is not a complete waste of time nor is it a bad or uninspired album as such, but rather a well-played and yet unoriginal output. What I do miss are more ideas and atmospheres of their own as the compositions rely too much on ideas that were vomited forth 20 years ago by other bands. Again, it`s not a bad album per se, and I`m sure that purists and cold-hearted necro-worshippers will like it, but I hope that Kirkebrann will develop their musical and lyrical ideas even further and attain a voice and identity of their own in the future. There`s definitely some potential here.