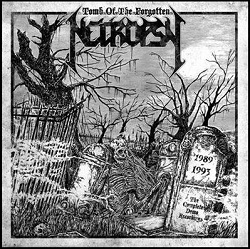 NECROPSY – Tomb of the Forgotten – The complete demo recordings

Necropsy, the forgotten gem from the first wave of death metal originals from Finland finally get their two minutes of deserved fame. Necropys with primarly the Kosonen brothers as the driving force placed Necropsy on the death metal map along peers like Xysma, Demigod, Abhorrence (now Amorphis) and of course everyones favorites Demilich from the early 90´s.

Necropsy released a ton of demo´s, an EP and an split with fellow masters of death Demigod before an streak of bad events struck the band and they folded in 1993.

I´am not familiar with their comeback album from 2011 "Bloodwork", but when the 3 cd set called "Tomb of the Forgotten" reached my mailbox I was suddenly reminded of my tape bying days and the name Necropsy.

"Tomb of the Forgotten – The complete demo recordings" is released by Century Media and is done with such grace and beauty that it deserves to be take seriously.

The music spanning the three disks contain all of the mentioned demos and other releases from 1989 to 1993 and even though the material is quite diverse both in musical quality and production some of the material are very good.

Raw and relentless sounding guitars, drums that do more than just the mandatory fillings and the unmistakeable typical (now) finnish death metal growl, all thrown into a pot of evil the good old way. Personally I find very much of the material listenable as if it was 1992 but not everything stands the test of time. Especially the split with Demigod is good and recomended to check out.

Necropsy deserves to be heard and now is your change. You´ll get almost 2,5 hours of death metal pleasure on "Tomb of the Forgotten" and it´s a document of finnish detah metal that if not allways that entertaining still colors the pages of history.

PATRONYMICON – All Daggers Towards the Sky