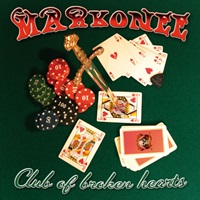 It’s a healthy time to be a melodic hard rock fan- tons of new acts sprouting about in all corners of the globe, while many of the veteran acts gain a resurgent burst of live action and also seem to be releasing killer studio product. Hailing from Italy, Markonee started in 1999 and have released two albums to date, gaining the chance to tour mainland Europe and the UK to showcase their material in front of audiences and performing with Gotthard, Winger, Molly Hatchet, Y&T, and L.A. Guns among others.

Guitarists Stefano Peresson and Carlo Bevilacqua set the tone with their straightforward riffs and point/ counterpoint efforts- very bluesy and dripping with a mix of 70’s and 80’s spirit. Check out "Angel, She Kept Me Alive" and "Piper Sniper" for the attention to melodic hard rock hooks a la Gotthard and Pink Cream 69, if siphoned through a deeper Whitesnake/ Rainbow angle. "Never Ever Loved Me" features 3 guest appearances, most surprising the piano work of Michele Luppi on piano plus a horn and violin section for this laid back semi-southern rock/ country-like ballad, which showcases an incredible emotional range and powerhouse voice in latest singer for Markonee, Alessio Trapella.

The quintet knows when to push the tempos to highway launch as well as keep things slower and more female friendly- as I can predict "Snake Charmed" and the rhythmically bouncy "Rock City" sure to go down a storm live. Great production values, all-star caliber performances- the only song that made me cringe a little is the blatant Helix/ "Rock You" rip off closer "J.E.S.U.S." with its call and response crowd to singer melodies, although the tempo is in half time to the Canadian rockers.

Those who miss the 80’s American acts with a European touch from Gotthard/ Pink Cream 69, "Club Of Broken Hearts" should be a no brainer pick up.