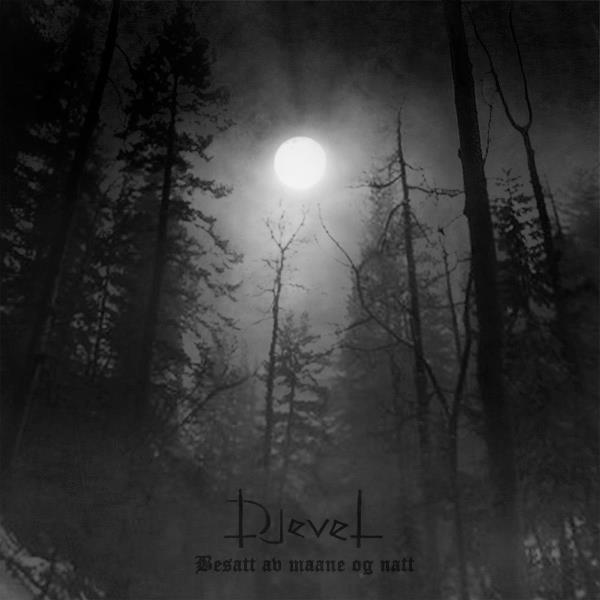 The Norwegian entity named Djevel, which was conceived back in 2009, released its second full-length album entitled "Besatt av Maane og Natt" via Aftermath Music not that long ago. As the band name and title of the album suggest, we are dealing with cold, pitch black and atmospheric black metal with a rather old-school, traditional feel to it.

"Besatt av Maane og Natt" consists of 8 songs that all sound like they could have been recorded in Norway back in the early 90ies. The melodies are cold and melancholic, the guitars are razor-sharp and trebly, and the bass is clearly audible in the background and add some depth and substance to the songs while the drums (courtesy of Dirge Rep) keep the whole thing together. There`s no sloppy playing or anything or that sort to be found on the album, and the production isn`t crap either as it fits the song material.

My favorite songs on the album are the moving and beautiful instrumental "Blant Fjell og Falne", the melancholic title track, the freezing cold "Saa Tok Alt Slutt" and the hard-hitting and intense "Tornekroner og Geitehorn". Just listen to those the killer bass lines in the latter or the clean-like vocal chants in "Saa Tok Alt Slutt"! Also, most of the breakdowns and mid-tempo parts that crop up here and there are rather well-ranged and add some diversity and dynamics to the whole thing.

Even though "Besatt av Maane og Natt" has its fair share of haunting moments, it`s not a must-have album as such. It`s good, consistent and solid all the way through, but it`s not up there with the all-time greats of the genre in my opinion. Fans of bands such as Orcustus, Koldbrann, Taake and Ljå will most likely find something interesting on this album. Heck, fans of Norwegian black metal in general will probably find something that will peak their interest on "Besatt av Maane og Natt".