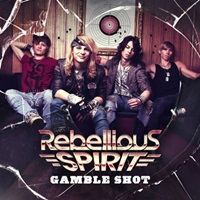 We’ve officially hit critical mass in the sleaze metal / hard rock movement when four musicians in the 17-20 year age range from Germany named Rebellious Spirit push their wares out to the world on this debut album "Gamble Shot". Admitting an affinity for current artists such as H.E.A.T., Reckless Love, and Hardcore Superstar, the quartet deliver 10 songs with this youthful exuberance and innocent naivety that keeps the core of the songs simplified and stripped down.

Expect in this case to have high pitched vocals from guitarist Jannik Fischer that gain support from band mates bassist Jens Fischer and second guitarist Corvin Domhardt that are part AOR, mostly Sunset Strip oriented- and musically accompaniment that isn’t fancy, merely getting the job done. "Cry For You" opens with some finger tapping from Corvin that reminds me of Autograph meets C.C. Deville, while the basic song is just a mid-tempo anthem that contains a Def Leppard-like drum tempo against a series of riffs and chord changes that rival classic Kix. "Lights Out" reeks of early Poison, might be a distant cousin to "Nothing But a Good Time" with some of the vocal lines and interplay between the music drop outs and larger than life chorus.

I much prefer when the band chose to go with tougher minded chords and tempos- "Gone Wild" has a lot of that sleaze rock spunk along with some of the early L.A. movement in its heart and "Forever Young" has those strong cultural chords that raise fists in the air instantaneously. Of course there is a little bit of ballad action too- "Change the World" and "Don’t Leave Me" taking on two angles, the latter more of the softer side that will probably be a female favorite in the live sets.

The band is decent, and talent is present- but originality is not their strong suit with this record. Rebellious Spirit needs a little bit of road seasoning and worldly experience which will hopefully shape up their second record to be more of their own entity- because "Gamble Shot" is a very risky venture for most sleaze/ glam hard rock fan to buy.