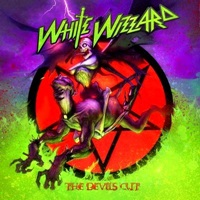 The third album from California’s White Wizzard represents another member change in the vocalist role as Joseph Michael takes over. Rest assured that bassist Jon Leon as main songwriter and leader has not sacrificed the quality of his output due to all the member changes (12 former members in their 6 year existence) as "The Devils Cut" is probably their most versatile and on the mark for the traditional metal crew.

Guitarists Will Wallner and Jake Dreyer should get the lion’s share of attention for their exemplary riffing and solo parts- tackling everything from pure shred to exotic dynamics and as a result keeping your ears pinned for what to expect next. White Wizzard employs basic anthem elements with Sunset Strip type chords and melodies on "Kings of the Highway" and conversely sends you spinning to the galaxy with galloping Jon Leon bass lines trading off with dual Wallner/Dreyer harmonies for the stellar follow up "Lightning in My Hands". Drummer Giovanni Durst channels the best of Clive Burr, Nicko McBrain, and a touch of the Bay Area thrash masters with his killer sense of timing and ability to regulate his tempos.

Joseph is another future star in the making with his multi-octave power and force. Clear with his words, the man knows his way around the catalogs of Halford, Dio, and Dickinson- expressive in all the right ways with the Priest meets Dokken-like semi-ballad "Steal Your Mind" just as much as the closing epic march "The Sun Also Rises". The cartoon-ish cover art nonetheless doesn’t diminish the quality of this album.

Reigning in a lot of the musicianship that seemed to be left of center for the more progressive oriented "Flying Tigers", "The Devils Cut" rivals a lot of what we’ve heard from the younger Scandinavian scene (Steelwing and Wolf especially) and is definitely a potent traditional metal record for their discography. This should translate very well when they take this material on the road.