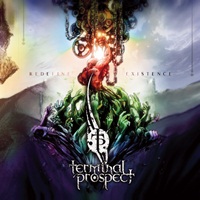 Certain standards apply to differentiate the contenders from the pretenders in metal. Especially in the case of popular sub-genres: open for discussion when taking in Terminal Prospect is their brand of thrash metal on this album "Redefine Existence". The Swedish quartet formed in 2005, straddling the line between old school uppity thrash and a more modern brand of death metal- the latter coming to the forefront with guitarist Kristian Norelius’ sandpaper screech worthy screaming employed endlessly throughout these 11 tracks (10 vocally though as "Unfortunately Not" is a 2:10 instrumental).

A lot of the material has this mid-tempo stomp/ groove factor going on which brings to mind an intriguing concoction of say lower tuned Machine Head or Trivium along with a sense of current In Flames into the obvious Bay Area thrash riff management that Norelius and his axe partner Jussi Niiranen employ. "The Exodus" and "Price of the Age" two of the tighter riff-tastic arrangements, both getting the job done in under three minutes. "Resurrection" features this drum shuffle from Sebastian Rojas not dissimilar to At The Gates if run through a Nevermore studio session, while "Aggressive Obsession" is just one of those straightforward upbeat thrash numbers tailor made for sweaty, pent up anger release.

Where Terminal Prospect loses my interest is the one-dimensional vocals. I have no problem being extreme, but the hoarse nails on a chalkboard screams just appear to be more in line with the latest metal-core acts- where I think a little variety in the lower register would do songs like "Chains of Guilt" and the title track a world of good.

I’m sure there will be many metal consumers willing to look the other way and merely purchase "Redefine Existence" for its killer musicianship and energy. For me to put this into a must buy act however, I prefer the total package: and as such, Terminal Prospect is one of those lurking in the shadows groups, not quite there to achieve bigger glory from the underground trenches.

REDRUM – Victims Of Our Circumstances