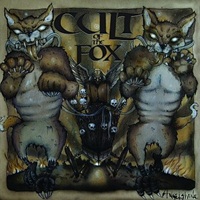 CULT OF THE FOX – Angelsbane

Proper metal band names appear to be a dying breed. The shorter the better I always say. As such, Sweden’s Cult Of The Fox is not a promising start as I can’t imagine audiences large (or small) shouting ‘CULT OF THE FOX’ in between songs or at the end of a set to cajole the group back on stage for an encore. The four-piece started their heavy trade in 2000 under the name Cross Bow (an equally questionable choice of moniker), releasing a series of demos and singles before changing to their current moniker in 2007. "Angelsbane" is their second full length album, coming off of their Metalbound Records 2011 debut "A Vow Of Vengeance"- and fresh with a new record deal, these 10 songs are fairly straightforward in their classic heavy metal stance.

Stylistically there are a lot of Manowar style rhythms and vocals in the Grave Digger tradition- along with occasional glimpse of double bass work from the 90’s era Judas Priest faction. Guitarist Erika Wallberg can certainly display a number of variant power chords and ability to perform at doom or heavy metal pacing: some of her best work in "Black Magic" and the Maiden-esque "Nine Ones". Most of the songs are at a compact 4-5 minute timeframe, and yet there are certain arrangements where the parts just seem to drag on for days… and not in a good way. The cultural/ epic strains of "Rising Flames" for instance just seem to float in space while the marching riff fails to climb out of the doom shadows.

The biggest disappointment lies with main vocalist Magnus Hultman. When it comes to straightforward, old school heavy metal- you expect the singer to have charisma, character, and above all potent power. Magnus just rumbles through the lyrics with this Chris Boltendahl warble with no depth of feeling and seriously wounds any sense of enjoyment- and when he talks through parts of "Winter Came Silent" I thought I was listening to a possible case of multiple personality disorder.

When I’m nodding off to sleep 20 minutes into a 47 minute album, you know "Angelsbane" is not going to be on my playlist this week, this month- or anytime in the coming century. Cult Of The Fox would be best served slyly rethinking their songwriting and come out with something much stronger next time.

BOMBS OF HADES – The Serpents Redemption